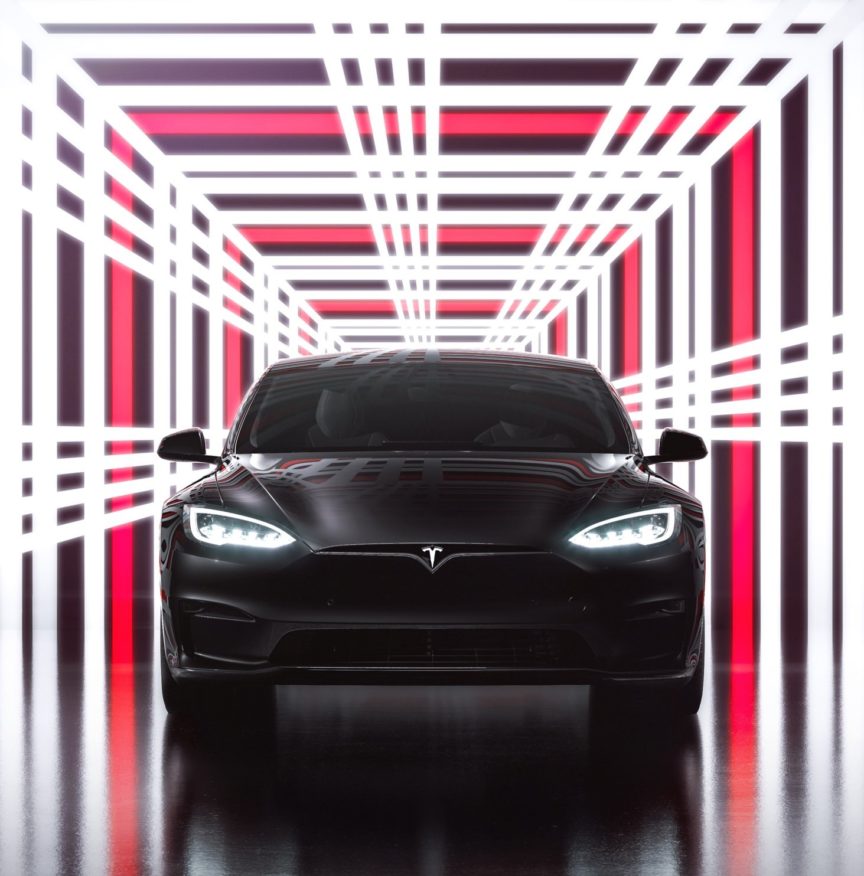 A little while ago I did the crazy thing of ordering a Model 3. Big event last Friday (11.06) because Elon Musk hosted the long awaited Plaid Delivery event in Fremont, California and I needed to stay at home to receive my Model 3 vehicle registration documents (sent with UPS Express 12:00 from Hamburg, Germany). That’s how I got the chance to watch what was happening on the other side of the planet.

Aside from the expected jokes (Franz von Holzhausen opening the evening with a sledge hammer in his right hand and Elon admitting that Tesla’s product plan is stolen from Spaceballs), we got an inside into some of the novel technology improvements that make the Model S Plaid possible and further set Tesla aside from the legacy automakers.

The vast majority of the car specs were known before the event. Here is some of the new info we received:

Elon started the event with a Tesla launch. The ultimate launch offered by a production car: 0 to 60 in under 2 seconds. 100 mph in no time. Not everyone finds Elon Musk’s extravagant style appropriate, but, who cares?! Tesla and Elon have always proved their point through facts, through the products they’ve released to customers. And amazing products they are!

Right in the beginning Elon clarified why they are building this car: Tesla is already known, at the very least, for quick cars. Why bother going faster? Why bother to build an electric car with such an insane acceleration that is able to endure the level of abuse a race car endures? Because it is important for a future based on sustainable energy.

The performance of its cars is what brought Tesla to this point. More and more people are switching to electric cars, but there is still work to be done. There are still more non-electric enthusiasts out there as electric enthusiasts and, Elon Musk and Tesla, with their product plan “stolen from Space Balls” want to reach every last one on them.

Because not burning fossil fuels matters. Because mitigating the effects of climate change is something that will profit not only Elon Musk, Tesla, Jeff who and other big names. It will profit you and me and every person living on this planet we call Earth.

If that doesn’t matter to somebody, if so much misunderstood cynicism prevents somebody from seeing the greater good, I would kindly ask him/her/they to take a moment, have some modesty and think about the future his/hers/their children/loved ones will have. Not a bright one, unless we stop disrupting our planet’s climate.

About the Plaid Model S.

One of the major technological improvements which makes this car so fast and efficient is the new carbon sleeve which wraps the electric engine rotor. The conventional material used for the rotor sleeve is normally high strength steel. Tesla improved on this design and changed the material to carbon, which gives more strength to the rotor, especially at high RPMs, and, at the same time, makes the electromagnetic field in the motor very efficient.

The Plaid carbon-wrapped motor is arguably the most advanced motor on Earth outside of maybe a lab somewhere. We have to keep some secrets!

We have a few ideas for increasing torque & max rpm even further for new Roadster. Definitely fun & exciting engineering ahead!

The car has the lowest drag coefficient of any production car: 0.208 Cd. The measurements take into account not only the car body but also the wheels, which generate additional “air churn and incremental drag”. It also features an improved HVAC system (Heating, Ventilation and Air-Conditioning) which, along with the heat pump, allows it to experience very little degradation in cold weather.

Tesla is known for building very safe cars. The Model S Plaid was engineered for maximum safety. Already, in a test done by NHTSA (National Highway Traffic Safety Administration), the first five cars with the lowest probability of injury are all Teslas. The Model S Plaid is expected to take the top lead in that ranking.

“I think, generally, all input is error. If you have to do something that the car could have done already, that should be taken care of”

Along with the controversial steering yoke, Tesla has introduced a new feature called Auto Shift. There are no more stalks around and the car is supposed to know if you want to drive forward or reverse. It will choose the appropriate direction based on a combination of Autopilot sensors, user data and geolocation. The driver can override Auto Shift using a menu on the screen or dedicated capacitive buttons underneath it.

Auto Shift appears to be optional, can still choose a direction manually on the touchscreen ( I still want a stalk for quick shifting though…) pic.twitter.com/vL6J0nOa5j

The back seats have also received considerable attention. There is a 36 W USB C port in the back and the sound system has been completely redone. It now features 22 speakers resonating on Tesla acoustic glass. Tesla is now using their own audio codec, which will be constantly improved through over the air updates.

The car is centered on entertainment. It has a MCU (Media Control Unit) with PS5 level performance. During the event, someone was playing Cyberpunk 2077 in the car. And, if someone will say that electric cars don’t have enough juice in them to compete with “real” badass cars, the Tesla Model S Plaid is intended to contradict them: it maintains 1000 horsepower all the way up to 200mph.

The Tesla Model S Plaid is intended to be the ultimate 4 door sedan: efficient, performant and super fun.