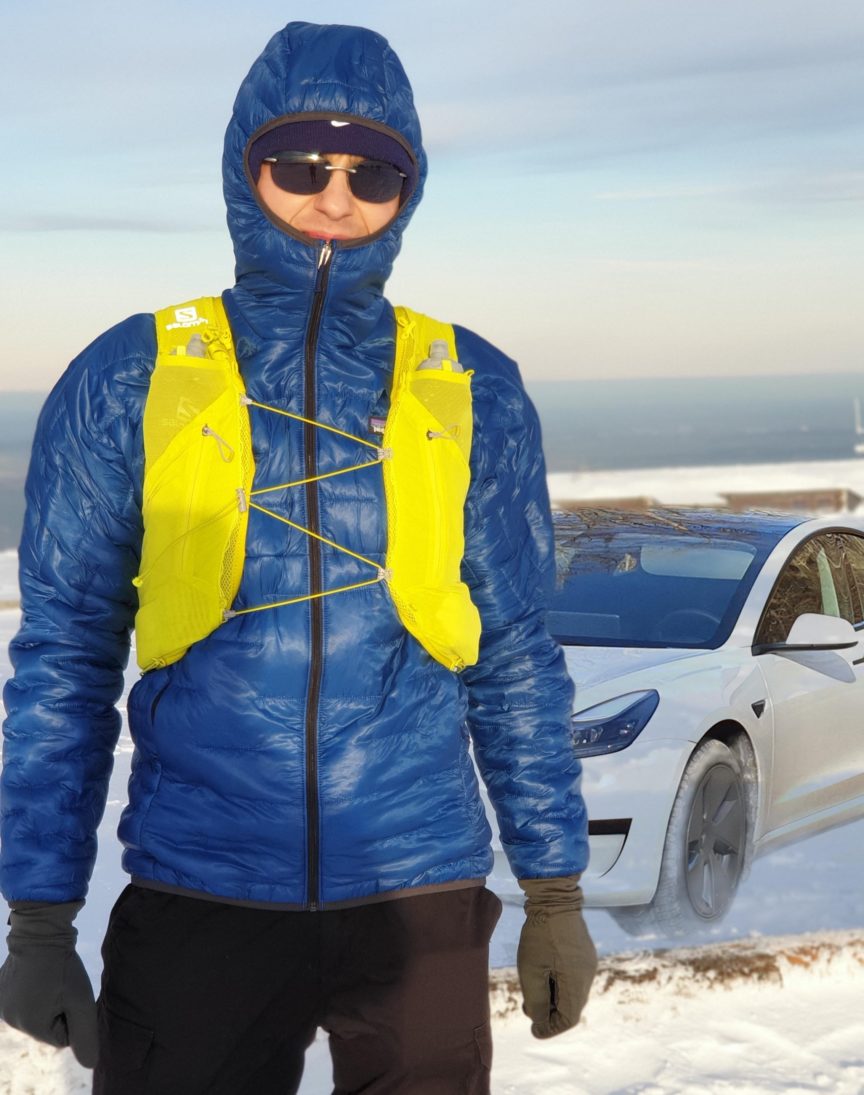 We bought our Tesla Model 3 Standard Plus in May 2021 and took delivery the following month. It stayed under a car cover in our parking lot for a week because I couldn’t register it in time (corona disruptions), but then it got rolling.

The car was delivered on our doorstep with 5 miles (8 km) on the odometer. This February it passed the 10k mile mark.

Driving in cold weather with an EV is not bad, at least not if you’re driving a Tesla. The Model 3 did its job perfectly in our last 300ish mile (500 km) road trip. I picked up the car at 6:30, charged up and completely defrosted and at 7:30 we were on our way to the Harz National Park, Germany, in search of snowy adventures. 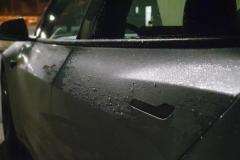 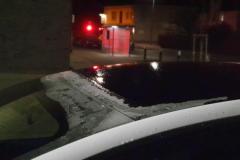 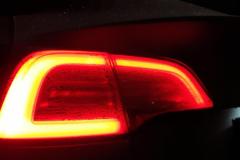 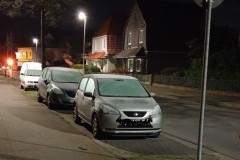 The difference in range vs normal weather is staggering. We had an average 342 Wh/mi (213 Wh/km) energy consumption, but I’m not complaining because the Tesla supercharger network made it possible for me to maintain my Autobahn driving style.

If there’s no need, I usually avoid depleting the battery below 10% and this time was no different. We were already parked at the Rühden Supercharger when the battery was at 10%. In about 40 min, 47 kWh of energy were added, time in which we enjoyed a huge normal-sized coffee. 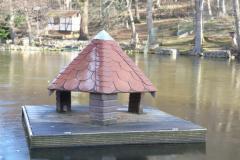 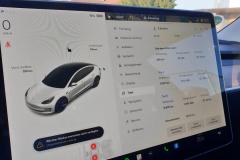 With the battery charged at 85%, we set a course for the Harz highlands. Cold weather, but sunny. We were expecting to find some snow (according to some recent Instagram posts), but at our first stop at the Wild Park Wernigerode Christianental there was none in sight. The lake was frozen though.

The way goes up

Off we were towards the Brocken, the highest summit in the National Park Harz. This summit towers the region at 3746 ft (1142 m). Getting there is a child’s play compared to getting anywhere near some of the peaks in the Alps or similar mountains. Nevertheless, it should not be taken lightly.

We parked the car at about eight and a half miles (14 km) from the Brocken and from there we continued on foot. The scenery began to change after we passed the 2300 ft. (700 m) altitude. A thin blanket of snow on both sides of the mountain paths/roads, then on the paths themselves and, all of a sudden, everything was covered in deep snow. 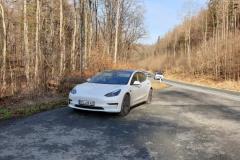 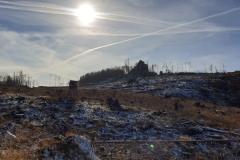 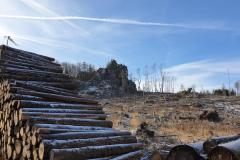 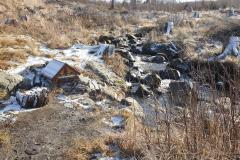 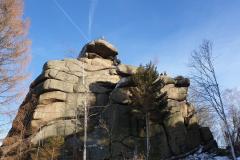 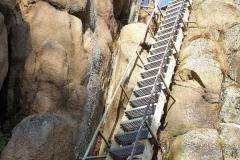 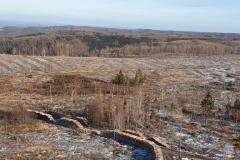 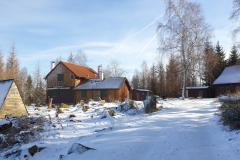 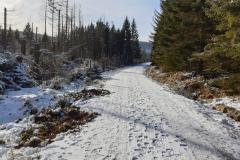 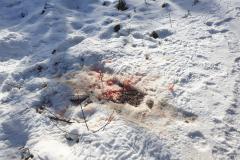 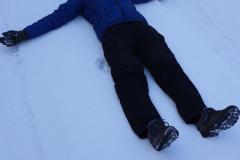 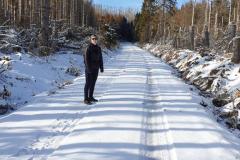 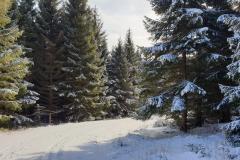 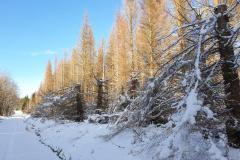 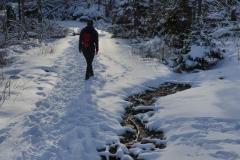 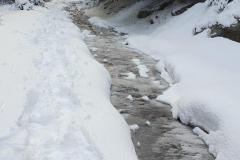 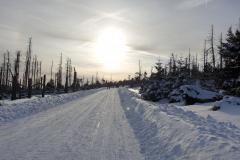 In some places we found marks left on the ground by wild boars, a place where some poor creature found its end and, as we were getting closer to the mountain peak, more and more people heading that way, trying to get the most out of this frosty February Saturday.

We took a left turn on a small path leading upwards between frozen spruces and we were all of a sudden treading through snow 20 inches deep (50 cm). As we neared the summit, the wind started to pick up. Not much at first but in the last mile to the top it turned into a proper arctic. It was unexpected.

On top of the world

On the top of the mountain is this huge plateau and the scene we found there was cut from a documentary about the North Pole: freezing cold, with howling winds blowing snow on a scenery lit by the sun sinking into the lowlands. A medical helicopter was just taking off, after it probably responded to an emergency, adding to the other-worldly feeling this place conveyed.

But we had no time to waste. It was almost 5 o’clock in the afternoon and we had to hike more than 8 miles to get to our car. We shortly considered which route to take back, but after one of our phones succumbed to the cold and the other had only 19% battery, the way we climbed was the safest route. 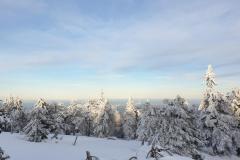 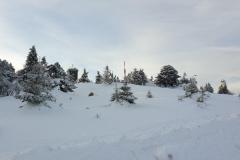 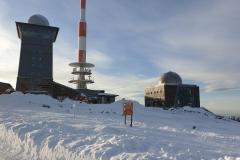 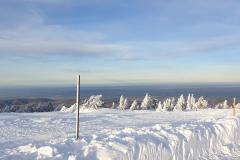 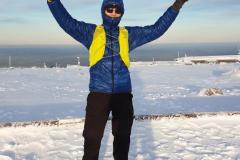 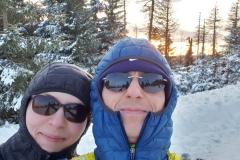 It was twilight when we left behind us the paths with deep snow and it was already dark when we reached the place where we’ve previously seen the marks left by the wild boars. At one point, we could feel the smell of pig in the air, a clear sign that they have just fled from there ahead of our approach.

All the while, the wind worsened and, at one point, it seemed it wanted to bring the forest down on us.

Having feared that we took somewhere a wrong turn, we continued descending. We eventually reached a place that was very familiar and from there on it was easy game to the comfort of our pre-heated Tesla Model 3. It was after 8 o’clock.

Regarding the way back, there isn’t much to tell. The way back is almost always boring, except when you find a good podcast to listen to or if you’re in the mood to listen to some good music.

Because in the evening the temperature didn’t drop below 32℃ (0°C), the energy consumption returned to almost normal values of 258 Wh/mi (160 Wh/km).