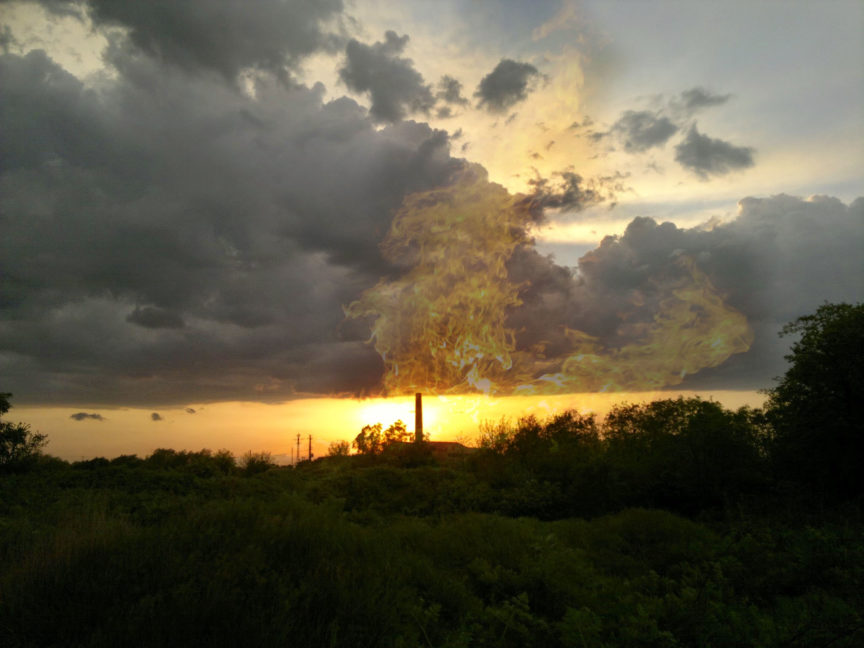 In every moment of our life, we are taking decisions that will affect us now or in the future. If we can’t decide, the microbes that live inside of us will “decide” on our behalf. You, as a human being, are a community of living things. We, as a group of people, are a community perpetually shuffling between existing and new members.

A community doesn’t just exist; it has its roots in the past, occupies the present and it reaches into the future. But it is fundamentally shaped by the environment in which it exists. If the community becomes large enough, the balance somewhat changes and the community begins to noticeably influence its environment. The influence can be beneficial, but very often it is not. We are living this today.

Our species has become so proficient in what it does, that our exploits influence the environment at a level which raises some profound ethical dilemmas: we are not changing the setting only for the timespan in which we live; we are producing changes that will unfold in decades to come, if not centuries. Our actions now, will affect other people in the future.

One of the most significant change in which we play a big role today is climate change. Through urbanization and industrialization, the spread of modern agriculture and commercial fishing, humanity’s collective “effort” is producing unusual levels of exhaust. This leads to an accumulation of greenhouse gases in Earth’s atmosphere which lead to an unusual accumulation of infrared radiation (heat) coming from the sun, which in turn leads to the overall warming of the planet.

It is a downward spiral

In a normal situation, the heat coming from the sun is dealt with by our planet in two ways:

Because the mixture of gases found in the atmosphere is changing, several things are happening at once, all interconnected:

It’s a downward spiral, which has at its bottom the very probable annihilation of civilization as we know it. The planet will surely endure.

What is the greenhouse effect?

The process is relatively simple: energy enters a system and only a part of it eventually exits the system. Take, for example, the case of a glasshouse: the better the insulation, the more heat will be kept inside it.

Gases responsible for the greenhouse effect

Not all gases composing the planet’s atmosphere react in the same way to the energy emitted by the sun. Some trap more heat, others less.

Here is a breakdown of the greenhouse gases (GHGs) most responsible for trapping heat:

What is the global temperature?

Climatologists divide the planet’s surface into latitude-longitude grids, every individual cell containing data from weather stations in that particular region (where there is no measuring station, algorithms are used to incorporate data from neighboring cells). This values are summed and an average of the result is calculated.

Still, how are we causing this rise in global temperature?

Starting with the industrial revolution in the 1800s, our factories, power plants and vehicles have released into the atmosphere unprecedented amounts of greenhouse gases. The trend gained momentum with every passing decade. Only in the 1980s governments of the western nations slowly started to recognize that the increasing levels of CO2 in Earth’s atmosphere are affecting the global climate. Ignorance is bliss, but emissions from burning coal, biomass, gasoline, diesel and other by-products killed in 2018 more than 8 million people worldwide.

Earth’s atmosphere is mostly composed of oxygen (21%) and nitrogen (78%). The remainder 1% is occupied by argon (0.9%) and other gases (the remainder 0.1%). This remainder of 0.1% is the place where the results of our industriousness gather up.

Although water vapor absorbs heat, it doesn’t remain in the atmosphere for a very long time. In approximately 10 days water vapor returns on Earth’s surface in the form of precipitation. This means that the influence it has on climate is of short duration. Compared to water vapor, carbon dioxide (CO2) remains in the atmosphere between 300 and 1000 years; methane (CH4) for about a decade. These are the GHGs that are inflicting an insane amount of damage.

The more greenhouse gases our industrial needs release into the atmosphere (through energy generation, manufacturing, transportation, food etc.), the warmer the planet will get. At the current level, we already have hectic weather patterns around the world and the trend will only get worse if we do not find better ways to do what we do.

To better understand the process, think of the atmosphere as a pool. If everyone swimming in the pool would pee in the water, it would be very unpleasant to keep on swimming. If the filters stop working and everyone keeps doing the same thing day after day, it will become unhealthy to swim in the pool. This is what’s happening with the planet’s atmosphere. We are poisoning it and we are doing it to our disadvantage.

Not to be concerned about the climate is the expression of ultimate selfishness and egotism. Cheats and parasites might benefit in the short term, but their actions will ultimately lead to the destruction of the communities in which they operate. They might not be directly affected, but everyone around them will. And, when dealing with the climate of the planet, the indifference of some and the perversity of others will disrupt the livelihood and prosperity of generations to come.

That is why the time to act is now.

The time to do something important is always now!

Reducing consumption, constraining travel, dousing innovation; it doesn’t sound very appealing and it shouldn’t. On a personal level, if you decide to throttle down your life, it’s fine: live around the house, use less power, enjoy your free time. But the human race will be done for if everyone would do this. Our needs disrupt every ecosystem in which we step, so to sit back, relax and let others do something about it is not a very good option.

We each have certain “pleasures” that motivate us to go forward, be productive, live our lives. We need to take hold of these things (discover what they are, if we haven’t already) and rethink them in the light of the looming doom of climate change. If not for us, for those that will undoubtedly be affected. We need to do the things we love in ways that will be less damaging to the environment (our community and the global community).

Needless to say, when speaking about fighting climate change, government policies weigh more than individual decisions. But there’s a lot you can do at a personal level. Maybe you need/want to change your car. If you can choose between a normal car and an electric one, the latter will prove cleaner in the long run, even though you will very probably spend more time charging it than you would spend fueling a normal car. You’d be sacrificing your time to help mitigate climate change and you would be joining other people who are already doing this.

Food is not only the fuel that keeps us going; it’s that satisfaction we’re allowing ourselves every time we’re sitting down at the table. But there is also a lot of suffering mixed in the package we’re opening. Maybe this is the hardest thing to admit, the hardest change to undergo. But we can train our brain what to like. We just need to want it strong enough and act on this wish.

If you want to invest your money in a company, do a little research and put your money in a company that’s dedicated to creating a better future, not only to increasing their balance sheet. If the money from a company are flowing in the pockets of a little group of people and not much is returning to the community in which they operate, it can’t be good. Their business might be booming now, but it’s questionable if this is a sustainable model in the long haul.

AnaThe Western world will probably have enough resources to fend off most of the effects of climate change (at least for a time). The developing world will not. They will be harder hit. Millions will be displaced and they will seek refuge in regions less affected by climate change. In general, people are very scared of people who migrate, if not for anything else, for the fact that they represent change, they bring with them change.

People fear change. There is a laziness inherent to every one of us, but especially to those afraid or unwilling to accept change. Will we turn our backs to those in need? Are some of us doing this already through inaction and indifference?