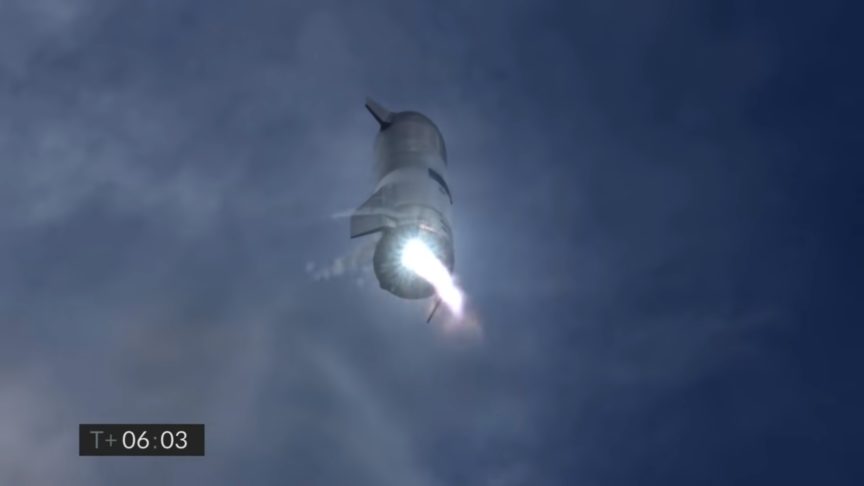 Elon Musk and SpaceX have made propulsive landing cool.

On March 3, 2021 SpaceX has once again made history: Starship SN10, a rocket slightly taller than the Chicago Water Tower (160 ft) and with a diameter almost the size of a tennis court (30 ft), took off and landed vertically in Boca Chica, Texas. It is the third Starship prototype which ascended to an altitude of 10 km using three methane-oxygen Raptor engines, but the first one to land in one piece.

The flight test was initially scheduled to take place at 3 pm EST, but the launch was automatically aborted 10 milliseconds after ignition. What appeared as a static fire test was caused by one of the Raptors producing too much thrust (power), which led to the untimely scrub. Elon Musk announced shortly via Twitter that SpaceX will attempt to fly the rocket later the same day.

Three hours later, everything looked good for launch and Starship SN10 took off at 6:15 pm EST from the SpaceX South Texas launch site. The camera located above the engines provided a beautiful view of the three Raptors working. It’s worth noting that one of the engines was burning with a different color, which might indicate that it was burning a rich mixture of fuel (more fuel than usual).

At T+02:15 one of the engines was purposely shut down, followed by the second at T+03:15, at an altitude of 8 km. Shortly before T+04:00, SN10 reached its targeted altitude of 10 km (32,808 ft) and, a few seconds later, the remaining Raptor engine reoriented the rocket horizontally for descent, after which it shut down.

The four giant aft and fore flaps kept the prototype on course to the landing pad during the entire skydive. Tim Dodd, form Everyday Astronaut, said on his livestream of the event that the descent of SN10 was looking quite frightening because the rocket seemed to be just above the place he was filming from.

At about 500 meters from the ground, all three engines reigned. They looked like hard core blow torches. 6 minutes and 20 seconds after liftoff, Starship SN10 was sitting upright on the landing pad, albeit slightly tilted and with flames coming from the side of the rocket where the fuel pipes were located.

So the landing legs did deploy!

But if you look closely, some of them didn’t lock in-place… you can see them dangling!

I don’t think they would’ve made much difference anyway, given the touchdown velocity!

The landing was definitely softer than in the case of SN8 and SN9 but it wasn’t as soft as it should have been. According to Elon Musk, Starship SN10 hit the landing pad at 10m/s. That’s the force a car suffers when it hits a concrete wall at 30 km/h (22 mph). Pretty tough. To make matters worse, of the six landing legs (which are in the process of being optimized), only half deployed successfully. The other three can be seen swinging back and forth under the skirt. Not that it would have mattered, because the force of the impact was beyond their designed dampening capacity (again, according to Elon).

Partially, the fault seems to have been caused by adjustments SpaceX has made after SN9 crash-landed. They added helium in the header tank to help pressurize it and this seems to have reduced the power the Raptor engine had when the vehicle landed.

SN10 engine was low on thrust due (probably) to partial helium ingestion from fuel header tank. Impact of 10m/s crushed legs & part of skirt. Multiple fixes in work for SN11.

We are used to seeing rockets takeoff and blow something up or burn up into the atmosphere, upon reentry. Not anymore. We have entered a new era in the aerospace industry. Reusability is the key word. In an effort to drastically reduce the costs of reaching outer space, several entities around the world have adopted vertical landing their rockets as the path to achieving this goal.

It’s becoming a new market standard, where sustainability is the byproduct of competition between different companies, and who doesn’t live up to it, will very probably run out of business.

Vertical landing of a spacecraft isn’t a completely new concept. Most notably, the Apollo Lunar Module landed propulsively on the Moon. Blue Origin has their New Shepard booster rocket and there’s SpaceX.

SpaceX, with Elon Musk at its tip, has made the biggest impact in this direction. Since their first successful landing of a booster carrying satellites into orbit on December 21, 2015, SpaceX has landed countless boosters – on land and on sea platforms – in something that seems absolutely surreal to watch. This is the Falcon 9 rocket, which delivers satellites into space, cargo to the International Space Station and even astronauts to this amazing orbital laboratory.

Then there is Starship. SpaceX is already sending more cargo into outer space than other aerospace companies. To understand the scale at which Starship is operating, one of Elon’s recent tweets is very helpful at doing just that: “A single Starship is designed to do in a day what all rockets on Earth currently do in a year”. In numbers, Starship will put in orbit 100+ t (220+ klb) of cargo. Pretty amazing. Starship is still in development but at a pace never seen before.

Regular agencies like NASA, ESA, JAXA, Roscosmos, etc. build prototypes, launch them and then analyze the results for months. SpaceX launched in the last four months Starship SN8, SN9 and SN10, 3 huge rockets of which two crashed and one landed and exploded shortly after. And, at the time of writing this article, SN11 was already on Suborbital Pad B, undergoing static fire tests. There are even rumors of a low orbit flight test later this summer.

If 2021 manifest is met, SpaceX will do ~75% of total Earth payload to orbit with Falcon.

A single Starship is designed to do in a day what all rockets on Earth currently do in a year.

Even so, ~1000 Starships will take ~20 years to build a self-sustaining city on Mars.

One very important detail: the primary motivation behind the development of this beast is to make it possible to build a self-sustainable city on Mars; to make life multi-planetary.

This is no joke and not bullshit, as I recently heard certain “informed” influencers state online. It’s the actual reason behind the entire struggle. Not money – although money is important; we’re not in Paradise yet, where everything is allegedly provided for/not necessary) –, not fame and not any other mundane thing. From what Elon has said and done until now, it’s very transparent that he is actually motivated by the desire to revolutionize space travel. And he’s doing just that.

Now that SpaceX has proved that Starship is able to propulsively land, the focus from here will be to iterate on this process and standardize it until they achieve a rapid and efficient build-launch cadence. What is amazing about reusability is the fact that the rocket which will have the biggest payload capacity will have the lowest cost of operation. It will be the difference between reusing an Antonov 225 and scrapping it after every successful operation.

This is history unfolding before our eyes. Not everyday history, that “happens” no matter what we do (almost). These are extraordinary events which would not be possible without the talented people at SpaceX, without Elon Musk, without the investors (many spilling over from Tesla) which make available their time (money) so that brilliant people are able to do what they do: magic, some would say.

SpaceX team is doing great work! One day, the true measure of success will be that Starship flights are commonplace.