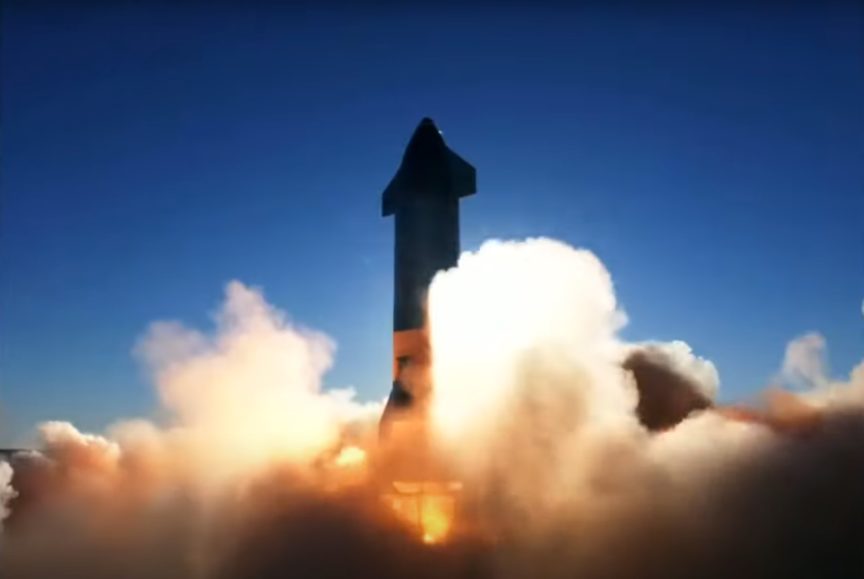 There are two big projects that Elon Musk and his teams have in Texas. One of them is the new Tesla Gigafactory near Austin and the other one is the SpaceX South Texas site at Boca Chica, near Brownsville. At this latter location, December 9th 2020 was a big day: the 12.5 km (40 000 ft) flight test of the Starship SN8. This flight test follows three other successful Starship prototypes tests: that of the Starhopper in August 2019, the SN5 in August 2020 and the SN6 in September 2020.

SN8 stands for serial number 8 and is the eighth iteration of Starship, the new spacecraft designed by SpaceX featuring fully reusable transportation capabilities. Starship is intended to take people and cargo as far as the Moon and Mars but also from any city on Earth to any other city in under one hour.

Out on the pad in South Texas pic.twitter.com/RcYOXXpTc2

The flight test was very anticipated because it was the first high-altitude flight of a vehicle with three Raptor engines fueled with methane instead of the conventional rocket grade kerosene. It had a number of important test objectives: the accent, propellant transition from main fuel tanks to secondary fuel tanks, flip maneuver at high altitude, landing flip maneuver and – of course – the landing.

In the week previous to the launch, the date of the flight test was postponed due to weather a number of times and on the 8th of December the launch was aborted at T-1.3 due to an engine issue.

On the 9th of December, the actual flight test took place and every objective was achieved except for the last one. At 5:45 p.m. EST SN8 lifted off and slowly ascended to 12.5 km. During the ascent the 3 Raptor engines purposely shutdown in succession, first one then the other and – at maximum altitude – the last, at which point the vehicle executed an extremely impressive maneuver – so called “belly flip” – in which it oriented itself in an 70 degree angle of attack suitable for a controlled descent.

My brain still can’t comprehend what I saw, but what I do know is. Yesterday marked the beginning of a new era, even though it was a small step. We are a giant leap closer to Mars than we were the day prior, the future of interplanetary travel is upon us. MARS HERE WE COME!🚀 pic.twitter.com/WPgQQdKpYV

SN8 proved the overall design of the vehicle perfect for a reusable spacecraft, it preformed perfectly the landing flip maneuver but, because it unfortunately experienced low pressure in the fuel header tank during the last moments of the flight, the prototype ended up in a RUD (rapid unscheduled disassembly) on the landing pad.

Although the rocket was lost, Elon Musk announced via Twitter that test flight was a success and the team has recorded all the data they needed. The damage to the landing pad doesn’t seem to be extensive and the next iteration of Starship is already being prepared to be moved to the landing pad, with a new test launch following soon.

Fuel header tank pressure was low during landing burn, causing touchdown velocity to be high & RUD, but we got all the data we needed! Congrats SpaceX team hell yeah!!

Pictures of the aftermath.

The sun-splashed side, straining toward the stars evokes the Jawas of Star Wars, joining me in the treasure hunt. pic.twitter.com/FbnE3sR20E