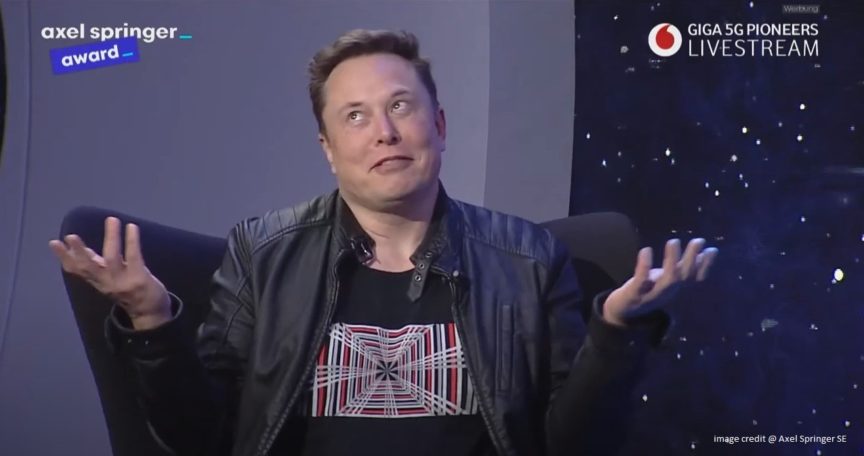 At the beginning of December 2020, Elon Musk received in Germany the Axel Springer Award for his outstanding achievements in the space, automotive and banking industries and for striving to revolutionize other fields, such as those of renewable energy and medicine. The Axel Springer SE is a notable German digital publishing company which comprises some of the country’s best known publications (Bild, Die Welt, Business Insider) and employs over 15 000 people worldwide. Among others, the previous prestige award honorees include the American author and scholar Shoshana Zuboff and Amazon founder Jeff Bezos.

The event started with a full load of German cringe, delivered by the “Mission to Mars” Starship captain Barbara Schöneberger, and continued with an inspiring interview between Elon Musk and Mathias Döpfner (CEO of Axel Springer SE).

The main topics discussed were the future of SpaceX missions and the vision behind them, the disrupting effect Tesla has in the automotive business, but also the catalyst it has become, AI and its impact on human society, the future of humanity and the role Musk’s companies will play in it.

The mission of SpaceX: to improve the probability of humanity being a spacefaring civilization

Asked when SpaceX will send people to Mars, Elon Musk said that an optimistic prediction would be 2026. There is also a possibility to achieve this two years earlier but chances are smaller in this case, given that the first uncrewed mission would be possible around 2022 and Earth and Mars synchronize every 26 months.

The motivation behind these bright predictions is equally exciting. When Mathias Döpfner asked Elon Musk what is the reason behind these enterprises, he delivered an answer worthy of the history books. In his words: “It’s not exactly a plan B… there’s two aspects to this: one is that we want to have a future that is inspiring and exciting. And what are the things that you find inspiring and exciting about the future? I think a future where we are a spacefaring civilization and out there among the stars… every kid gets excited about that; you don’t even need to teach them… it’s like instinctive. It’s very important for us to have reasons to be excited about life: like when you wake up in the morning, it can’t just be about problems!”

In his vision, Elon wants both to create a backup for life outside Earth (“consciousness as we know it”) and, at the same time, to shape an inspiring future in which people would be thrilled to live knowing that there are people on Mars and missions aiming further to the moons of Jupiter – and everyone will take part, in however small a portion.

The mission of Tesla: to accelerate the advent of sustainable energy

Because Tesla has become the most valuable automaker in the world in terms of market capitalization – surpassing Toyota, VW, Daimler, GM, Ford, Fiat Chrysler, BMW and others – Elon Musk was asked if it will be a serious option to buy one of the other big car companies. One of the reasons behind this incredible valuation by investors is the belief of many people in the importance of electric vehicles for the future of our planet’s climate. And this belief didn’t just come about; it was inspired by the remarkable products delivered by Tesla and the daring goals announced by Elon Musk. So, when asked if Tesla will buy “one of the incumbents”, Elon responded that if someone would seriously ask to merge with Tesla, “we would certainly have that conversation”.

Another very important Tesla related topic was the discussion about autonomous driving. Musk expects that in about 10 years the vast majority of cars (70-80%) will be electric and almost all new cars will be capable of autonomous driving. Tesla will achieve full autonomy (level 5) in 2021 and from there, the next step will be to receive the necessary regulatory approvals. He expects this to take longer in the EU than in the US – because “the EU regulators are the most conservative. They only meet every six months; it’s not very encouraging” – but the general public should be aware that an autonomous car will be much safer than a car driven by a human driver.

Mathias Döpfner characterized the work Tesla is doing at the Gigafactory Berlin-Brandenburg as a project unusual for Germany, especially for the Berlin area. The reason behind this is the fact that in the last couple of years, big construction projects in Germany have had a really hard time fighting bureaucracy, corruption and other hurdles and took way longer to be completed than initially planned. One famous example in the area is the Berlin Brandenburg Airport, which was opened almost 10 years later than expected. In this respect, Döpfner told Musk that he has “created a kind of anti-Berlin Airport project” in planning to finish the Gigafactory Berlin-Brandenburg in less than 2 years. Asked where he will be sleeping for the night, Elon responded that he will sleep in a conference room in the factory (probably alone!) because it gives him “a good feel for what’s going on”.

Elon Musk believes that there should be government oversight of AI development because artificial intelligence has the potential to be a real danger to the public. He likens the advent of AGI to a singularity (black hole) because it’s difficult to predict what will happen afterwards: it might be that there will be no negative effect but it also might be that we will trigger a force more destructive than that of a nuclear bomb. And Elon believes there is a good chance this will happen in 2025.

In respect to the AI developed be Tesla, Elon Musk pointed out that the form of AI developed for self-driving is a very narrow form of AI, so there should be no worry on this part: “The car is not going to wake up Sunday one day and take over the world”.

Another project in which Elon Musk is involved is Neuralink. The purpose of this company is to establish a feasible computer brain interface, with the long-term goal of building a bridge between the nascent digital super intelligence and the human brain. In other words, in the battle to control AI, humans will need a means of interfacing with it better than vision, which is today the mainstream medium through which we use computers, smartphones. The short term of Neuralink is to help cure brain and spine injuries and the first devices implanted in humans will be for quadriplegics and tetraplegics (paralysis that causes partial or total use of all for limbs and torso), allowing them to control a computer or phone with just using their mind.

At the end of the interview Mathias Döpfner asked Elon Musk a series of questions that might be deemed hard or very had to answer. One of these questions was what is the biggest challenge ahead of us? Of course Elon included the advent of AI on the top of the list but he also mentioned populations collapse (through low birth rates) and sustainable energy as some of the greatest problems we will have to face in the near future.

The flight test was a success, it was impressive and amazing. The landing was a little rough: the vehicle did not survive. Find out more at the link above!