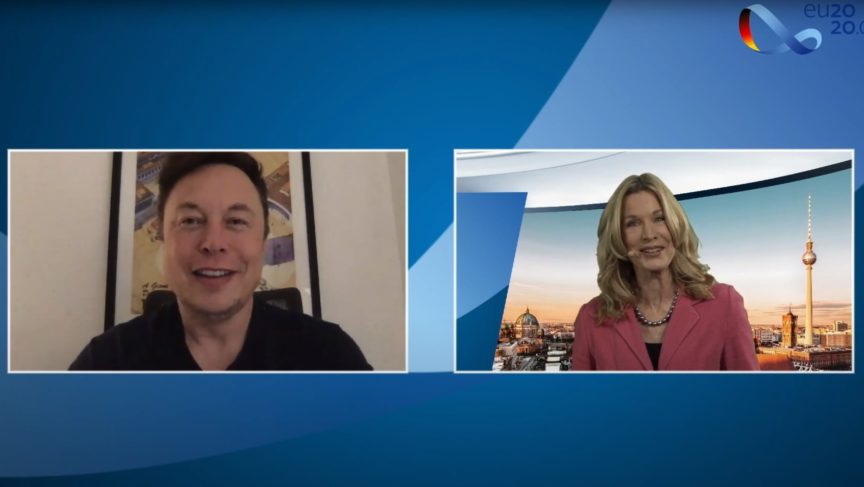 On the 24th of November 2020, Elon Musk participated online at the European Conference on Batteries. In an interview held at 2 am his time he emphasized, among other things, that Giga Berlin will be the largest and cleanest battery production facility in the world.

The important topics at a glance:

The European Conference on Batteries was an online event in which entrepreneurs, researchers and politicians discussed over a period of four days ways to make Europe more independent on the global stage in regards to battery production. Germany has pledged to provide up to 3 billion euros to local projects involved in this endeavor.

Although very early in the morning in California, Elon Musk has provided detailed explanations of the short and long term goals Tesla has regarding battery production in Europe and elsewhere.

1. Range improvements in the current lineup

“We have some (cars) under development long term that can do 1000 km.” Elon Musk

The maximum range of the current vehicles sold by Tesla is 600+ km (372+ mi) but the customers should soon expect this to go up to 700 km (434+ mi). Also, according to Elon there is in development a vehicle capable of traveling 1000 km (621+ mi) with a single charge (very probably the new Tesla Roadster and a version of the Tesla Semi).

2. Cost of the batteries: the fundamental impediment

The cost is “the fundamental thing that needs to be improved.” Elon Musk

Elon Musk regards the cost of the batteries as the fundamental impediment in the wide acceptance of EVs. Because quick charging batteries are already in use and the lifespan of the batteries can be improved up to 15 years, the cost is the only remaining factor which makes it hard to drop the overall price of an electric vehicle and therefore, make it available for a lot more people. “The (long term) goal is to reach a cost per kWh of 50-55 cents at the cell level for a long range battery pack”, at which point it will be cheaper to build a Tesla than a conventional ICE (internal combustion engine) car. The pursuit to achieve a smaller cost/kWh will bring about cells with a higher energy density, which translates in a bigger range. It must be noted that “there are a lot of innovations necessary in order to reach this goal, both in the cell design and in the factory which will produce them”, says Musk.

3. Scaling up the production

According to Musk, designing a prototype (battery/car) is relatively easy; the real problems occur when you attempt to scale up the production. To surmount this challenge, in the past yeas Tesla has made some key acquisitions – companies like Grohmann Automation, Maxwell Technologies and German ATW Automation – which have joined the internal effort of lowering the cost per kilowatt-hour and making possible the mass production of affordable, reliable and safe battery cells.

Tesla will start using a novel battery manufacturing process called dry electrode processing. This process will greatly reduce the overall vehicle manufacturing carbon footprint because the production of the batteries will become more environmentally friendly.
The conventional method requires the use of a solvent in the process of electrode production, whereas through dry electrode processing the solvents are not necessary, resulting in a considerable reduction of the CO2 pollution associated with battery production. Another advantage: because there is no drying up the solvent – the so called “baking” process – there are no other harmful gasses eliminated and the scrap resulted can be reused in the production of subsequent batteries. To a certain extent, this process will be implemented with specialized equipment from Germany and other parts of Europe.

There are “…a whole series of steps that are employed to ensure that environmental impact of the cell production is very clean.” Elon Musk

Tesla will implement a number of proprietary methods (steps) in the battery manufacturing processes which will reduce to a minimum the environmental impact of the new Giga/Terafactories. Some of these steps are:

Tesla already applies some of these technologies in their pilot plant (“a proof of concept”) located in the San Francisco Bay area, a region which is renowned for its extreme environmental requirements.

“…you could be living right next to the battery cell plant and you wouldn’t even have detectable amounts of any toxins in the air.” Elon Musk

The technologies mentioned above will be applied at scale in the Gigafactory Berlin-Brandenburg to create “probably the largest battery cell plant in the world”, says Musk. Giga Berlin will initially be capable of delivering 100 gigawatt hours per year with the possibility of upgrading up to 200 or 250 GWh/year. The real challenge will be the transition from prototype technology to high volume production because a lot of the machinery required needs to be built up from scratch.

7. Giga Berlin-Brandenburg will be the cleanest battery production facility in the world because:

“I was driving a Model X around Berlin and we had quite a bit of a trouble finding a parking space that we could fit”, said Elon Musk.

Giga Berlin will also be the place where the local teams will have the chance to come up with completely original designs based on the local requirements. In Musk’s opinion this will attract the best talent, because it will be much more appealing to work at something new than to simply adopt designs from California to the European market. What we should expect from the design center in Europe, at least in the first phase, will probably be a compact car like a hatchback.

“…around 300 watt-hours per kilogram (energy density) at the cell level is enough to get to the 800 km range.” Elon Musk

According to Elon Musk, the breaking point in the struggle between conventional and electric trucks is reached when the total mass of the electric truck (battery pack and chassis) is comparable to that of a diesel truck. This is achieved through advancements in cell energy density and battery pack integration. As a proof that this possible, a few Semi trucks prototypes are already in operation for over a year now.

In respect to range, 500 km (310 mi) is an easy target for a heavy truck capable of pulling a 40 t load. For long range trucking, Tesla expects a range of 800 km (497 mi) with the possibility of reaching 1000 km (621+ mi) after further improvements. And that is for a heavy duty truck capable of carrying a load of 40 metric tons.

It’s worth to be noted that some of these improvements mentioned above are long term goals which require further research and technological advancements but, as Tesla has already delivered on other seemingly “impossible” goals, it is to be expected that these will also come to happened – even if not exactly in the form here described