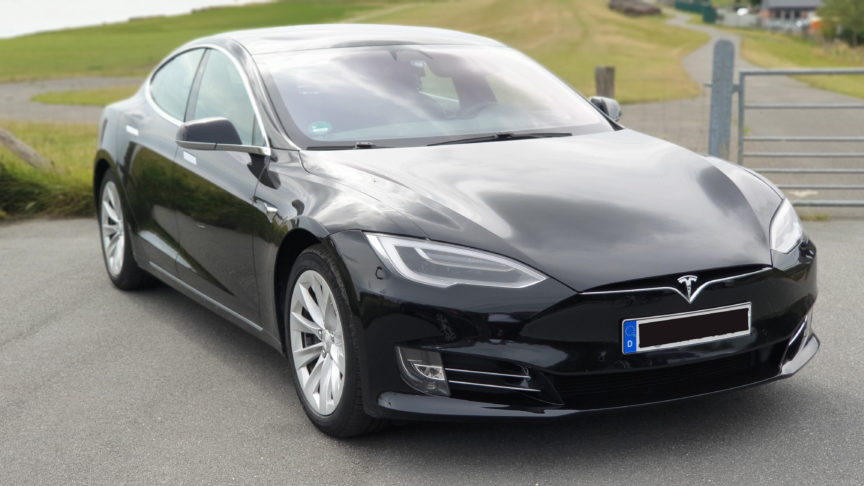 You feel that the Tesla Model S is heavy but it also has sufficient power to compensate. The visibility is very good and to navigate through the different menus on the touchscreen it’s a child’s play. The feel of the seats is also good, although I didn’t feel as comfortable as in my A6. I blame this on the fact that I didn’t adjust my seat properly; I usually drive with the seat backed up at maximum, my arms and feet almost fully stretched but now I was a bit nervous and I adjusted my seat closer to the steering wheel.

It took me completely by surprise how fast the car accelerates. I knew it would be fast but to experience it for the first time was both amazing and scary. When I accelerated on a small forest road I thought “wow, this sooo cool!” but I also thought that if I continue much longer I might lose control and end up in the ditch… so I took my foot off the acceleration pedal and drove further slower. The regenerative braking is also pretty cool. It’s a nice feeling to see that you’re generating electricity as you drive. You’re not just using power, you’re also regenerating a certain amount.

Using the cruise control was very easy. Press the button, pull the stalk down and that’s it. You’re cruising. On normal roads and on the highway, the cruise control will maintain the preset speed or the distance you set between you and the car in front for as long as you don’t disable it. Using this feature made me feel the car is really aware of its surroundings. On small roads where you need to overtake parked cars or other obstacles, the traffic-aware cruise control would proceed very careful: it would reduce speed when approaching a stationary object, assess the situation and then overtake if there was no imminent threat detected.

You’re not used to see your mouse move by itself on the screen and open system settings, folders and files!

To be clear, while I was using the traffic-aware cruise control I still needed to steer the car. I was simply using a feature which is probably present in a lot of modern cars. On the other hand, when I activated the Autopilot it was different. It was like when you let somebody take control of your computer remotely. You’re not used to see your mouse move by itself on the screen and open system settings, folders and files! The feeling was very similar. You suddenly become a spectator. You are concerned for your safety, of course, but it’s also amazing to see how the car becomes alive and follows the road almost as you would.

The Autopilot is activated if you pull the cruise control stalk twice towards you. A steering wheel icon will turn blue in your dashboard display and the lanes surrounding your car will turn blue. But you’re not done yet. It’s important to note that you need to hold your hands on the steering wheel at all times and you also need to nag it when asked so as to confirm you are with your eyes on the road. This is something that needs practice getting used to but it’s also very important because accidents do happen. For my part, I was holding the steering wheel with one hand and filming with the other and I received the “Hold Steering Wheel” alert just a couple of times because I didn’t nag it on purpose.

It is a little weird to hold the wheel when the software is steering because you feel you’re not in control and you’re not sure enough if you should fully trust it; but it’s worth it because the car is actually driving you and the experience is great. It works in the city – although I didn’t use it on a particularly busy street – it works on country roads and it works particularly good on the highway. It remains to be seen how long it will be until we arrive at the point where the steering wheel can be removed from Teslas, as Elon Musk repeatedly stated.